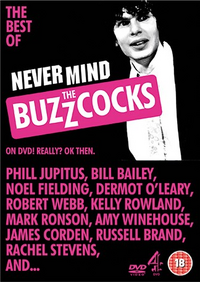 The Best of Never Mind the Buzzcocks is a best of DVD produced by Channel 4, it was released in region 2 format on the 16 November 2009.

The DVD features a series of unbroadcast scenes with a compulsary commentary provided by Simon Amstell and Phill Jupitus. It also feature three broadcast episodes.

Never Mind the Buzzcocks former host Simon Amstell and team captain Phill Jupitus have a rare out-of-hours get together to look back at some exclusive, never-before-aired, deleted material from the last 3 series. This exclusive DVD featurette includes clips ranging from the too rude, too drunk, too nasty, too sweary, too awkward and in absolutely no instances too funny for TV.

Also featured on this 'Best of' DVD are special compilation episodes from the last 3 series presented by Simon Amstell (2007–2009).

Alan Yentob takes a look back at the most talked about moments from the series, including Amy Winehouse spitting, Preston walking and Lily Allen controversially wearing funny glasses.

A touching retrospective on Never Mind the Buzzcocks

Never Mind the Buzzcocks — Technically, the Best Series Ever.

A thrilling look back at what were technically some excellent moments from the last series. Featuring a galaxy of technically good celebrity bookings and many, many technically funny scenes. Yes!

Retrieved from "https://buzzcocks.fandom.com/wiki/The_Best_of_Never_Mind_the_Buzzcocks?oldid=5256"
Community content is available under CC-BY-SA unless otherwise noted.